Video presentations from conference in November 2008:

"While traditional satellite TV and Cable services can cost easily in excess of $90/month, this new satellite technology literally turns your home PC into an international television broadcasting unit, allowing you to view all of your favorite & once unattainable programs with one easy click of your mouse. Watching TV on your PC has never been easier!

"Our product has been in development for over 7 years, and has been revamped by experts from Microsoft and IBM. With hundreds of thousands of dollars of research and development put into this product, Desktop Satellite TV is indeed the fastest, easiest and most cost effective way to view international television in today’s high paced environment." 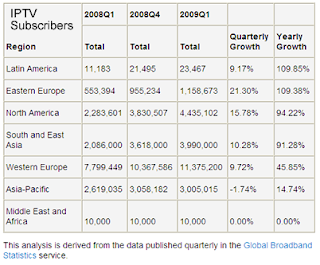 IPTV subscribers totalled almost 24 million by the end of Q1 2009 (23.99 million), up 9.77 per cent on Q4 2008 from 21.86 million and up 56.2 per cent year-on-year from 15.36 million. These figures are based on extensive research undertaken by broadband analysts at Point Topic. They are based on subscriber figures published in reliable sources, with estimates where necessary.

In terms of annual growth, IPTV proved to be a huge success story in Eastern Europe. Operators in this region offer a wide range of IPTV services which have proved to be particularly popular.

One reason for this growth is because IPTV is a relatively new service in Eastern Europe.

“Growth is high in Eastern Europe because IPTV take up is still relatively low when compared to other regions such as North America and Asia Pacific,” said Bosnell. "This is good news for operators and subscribers, because there is plenty of potential for growth coupled with a wide range of IPTV services so cost should remain low,” said Bosnell.

The North American IPTV subscriber base continues to grow, with the three big players all adding new subscribers over the quarter. They were AT&T (27 per cent growth), Telus (25 per cent) and Verizon (16 per cent). 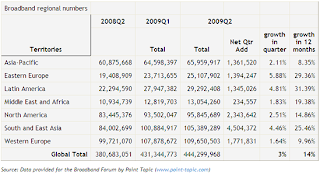 "The feel you get when you enter the ballroom at DEMO is unlike any other conference. Each company is given just six minutes on the DEMO stage to truly demonstrate how their product will change the world. No PowerPoint or flashy corporate presentations allowed. Just the founders and the technologies many are staking their careers on… it doesn’t get any more straightforward and fast paced than that."

http://www.scanscout.com/ad_gallery.html
"ScanScout is the market-leading in-stream video advertising network. The company partners with major advertisers and publishers to maximize video advertising opportunities. ScanScout creates a new significant revenue stream for publishers, helping them to extract the most value out of their video content and monetize it in a user-friendly manner. For advertisers, ScanScout provides the ability to target, optimize and deliver ad messages to the right content and audience, maximizing user engagement. "

TELE 4450, Fall 2009 is looking for new media taxonomies which may be posted here. 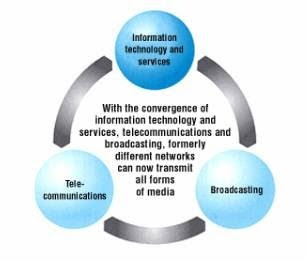 I'm a professor of emerging new media in the Grady College of Journalism and Mass Communication at the University of Georgia.

Note to self: directions for switch to new blogger. Please report any mistakes below to drbrucek@gmail.com